« Back to All Posts
Advocacy

If the Process is Sound, The Outcome is Sound

It has been an eventful election week, and for the third time this year, I had a front-row seat to our local democracy in action serving as the Chair of Traverse City’s Election Precinct 8 located at the Governmental Center in Traverse City. I won’t lie to you, I was pretty nervous about this election — my first presidential election serving as a precinct chair. What would the turnout be like? Would there be an issue of people attempting to vote a second time after already returning their absentee ballots earlier this fall? Would there be protests that would disrupt the voting process? Would we be able to handle a multitude of Challengers and Poll Watchers that may be present at each precinct? I was pleasantly surprised that my fears were entirely unfounded.

That’s not to say we weren’t busy. In fact, there was a solid line of voters starting from the moment we opened the polls at 7 am until 12:30 pm. There were Challengers present at my precinct — representatives of each major political party. However, just like the team of election inspectors serving along with me, I quickly found that the local Challengers at our precinct were just as interested as we were in making sure the voting process was conducted in a fair, transparent, and accurate process. We were all on the same team!

For those who may not be familiar with how our voting process works here in Michigan, here’s a quick rundown. Each election precinct throughout Michigan is staffed with a bi-partisan group with a Chair and Vice-Chair representing each of the two major political parties (Democrat and Republican) and a mix of additional fellow bi-partisan election inspectors. When you arrive to vote, you fill out an application to verify who you are and where you reside. Then you turn in your application along with a valid ID (or a signed statement that you are who you say if you are without an ID) where your identity, age, and registration status are confirmed through an electronic poll book. After you are verified, your ballot is administered. Once you have filled out your ballot a tab is removed by an election inspector and you submit your ballot into the tabulator!

This may seem like a lot of steps, but through this process, the accuracy of the ballots issued and cast are checked not once, but twice! First, each ballot application is filled out to list the ballot number and the voter number of each voter. The tab removed at the top of the ballot before it’s cast verifies that it’s the same ballot that was issued to the voter and confirms what voter number has cast their ballot. But that’s just the first check! In addition, each ballot number and voter number are recorded electronically before the ballot is issued. After the ballot is cast in the tabulator, the number of ballots issued by the electronic poll book are verified to match the number of ballots cast in the tabulator every 30 minutes that the polls are open. It is thanks to the hard work of our local city/township/village Clerks, County Clerks, and our Secretary of State’s Office that this thoughtful and elegant process is administered, protecting the accuracy of our elections!

Just like our election system, our three-way association agreement for choosing REALTOR Champion Candidates is a process that is sound and the outcomes speak for themselves. Locally we have gone 100% in electing our endorsed and supported candidates for State House races in the 101st through the 105th and Michigan’s 1st U.S. Congressional District! At a state level, the only miss was going 1 for 2 in the Michigan Supreme Court — not too shabby in an election year with a historic 100 year high for voter turnout and with some nail-biter election results here in Michigan.

It’s important to understand that victories like this don’t just happen. It is thanks to a sound process with candidate interviews that began as early as May of this year — prior to the August primary — to find and support strong REALTOR Champions early on and strengthen their election chances. This process allows our association to build the relationships necessary to protect and forward issues that support a strong real estate industry. It is thanks to members like you who support RPAC with their dollars, provide their time and their talents in candidate interviews ensuring we support the best candidates for our industry, and supporting endorsed candidates with your vote at the ballot box. There may be more election results to be determined at a national level in our country, but one thing is for sure; Tuesday was a big victory for our industry. Thank you all for your continued support to Vote, Act, and Invest in our industry, and here’s to more success in 2021!

Want to get more involved in real estate industry issues? Reach out to the Traverse Area Association of REALTORS Government Affairs Director, Connor Miller, at connor@aspirenorthrealtors.com or 231-944-8315 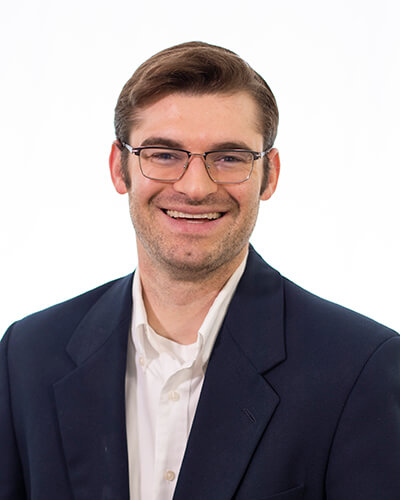 As the Government Affairs Director, I work to advocate for the real estate industry through programming that promotes the election of pro-REALTOR® candidates; engage, inform, and activate membership and local government officials on key local and state real estate policies; provide staff support to the REALTOR® Political Action Committee that invests members' voluntary contributions to protect and promote the real estate industry; and support the Aspire North memberships’ involvement in community projects to further grow and strengthen our region. 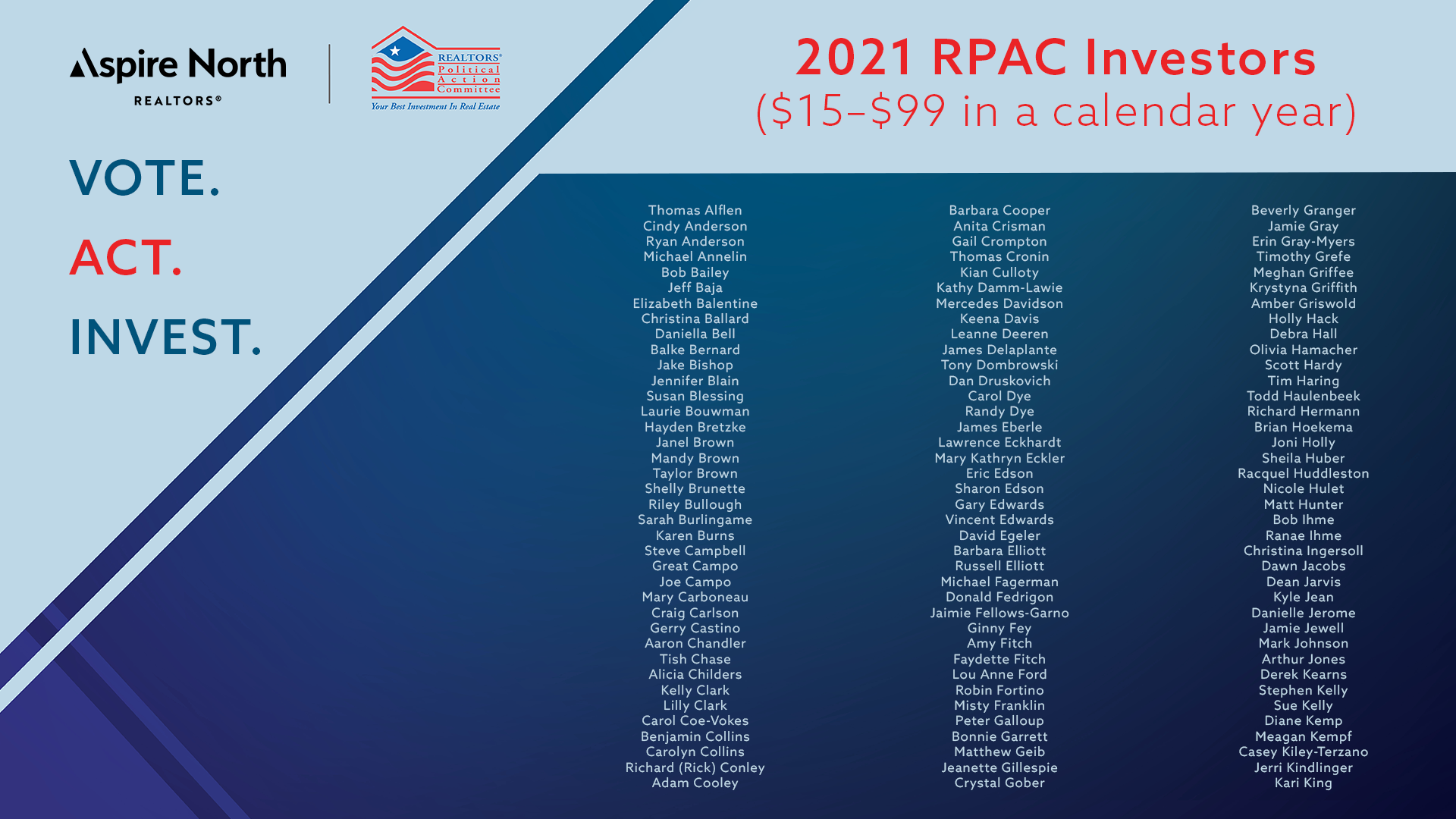 Thank You 2021 RPAC Investors!
Investing in the REALTORS® Political Action Committee (RPAC) is more important than ever! As one of the main methods of ensuring that REALTOR® issues maintain relevancy, RPAC’s... READ MORE 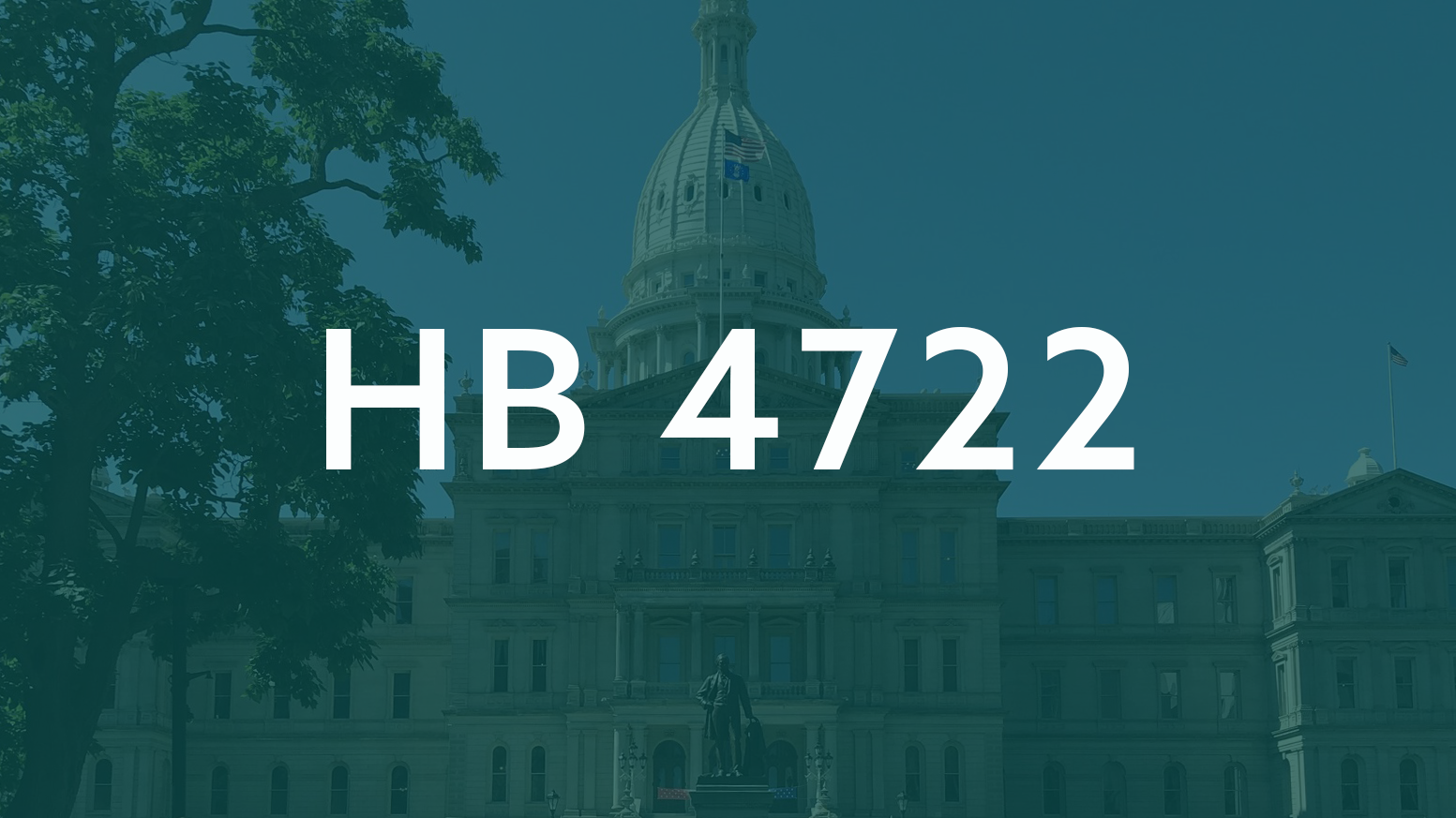 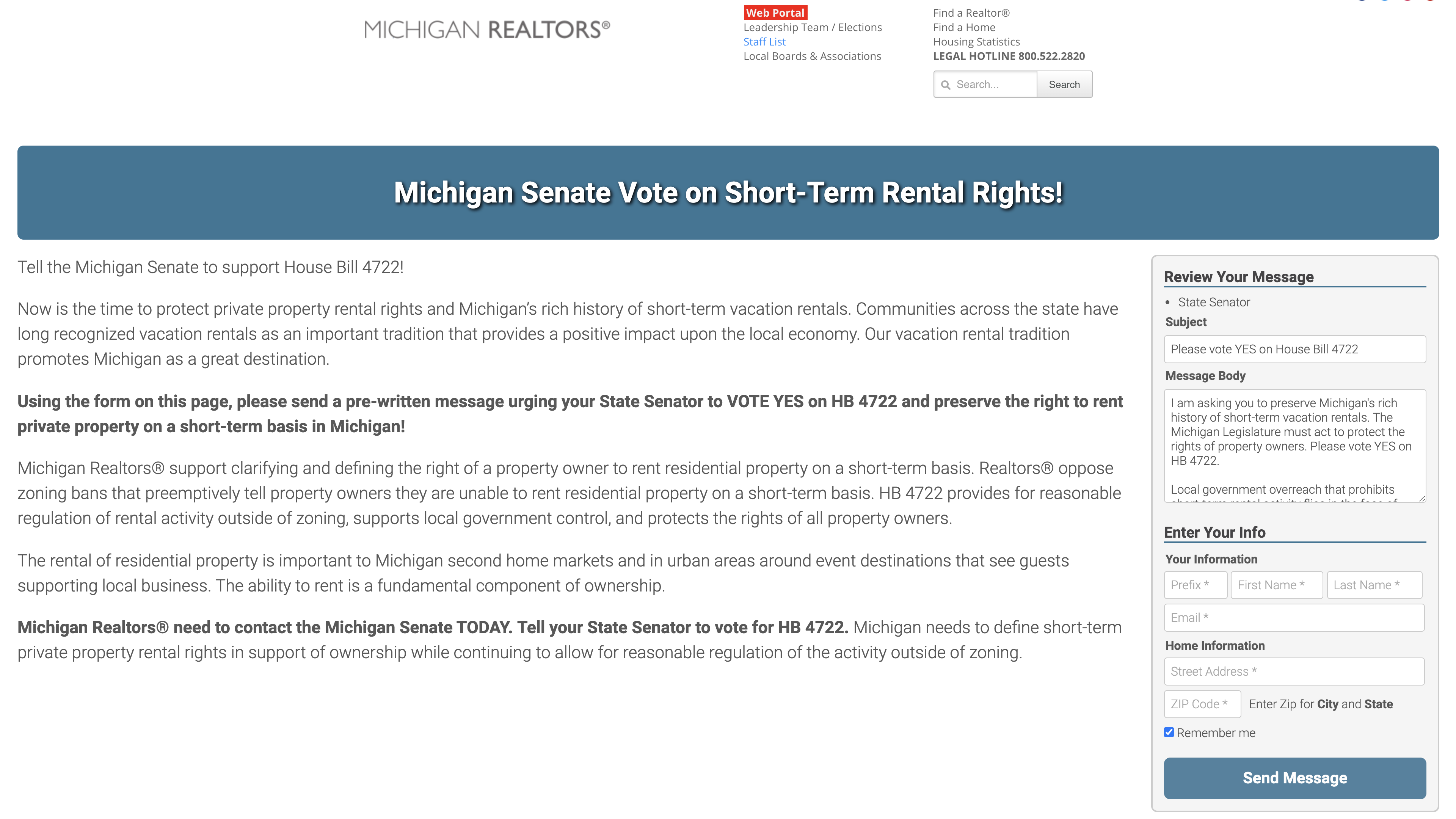